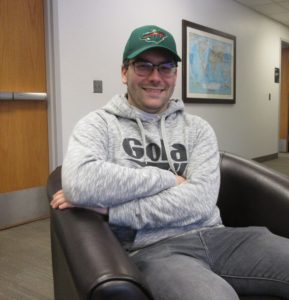 When I assigned an exemplification essay last fall, I was saddened by one of my student’s examples of stereotypes he’s encountered on our campus. His words prompted me to share a portion of his essay so that we recognize the effect our words have even if they are meant in fun. We are fortunate that our international students have chosen to learn with us, and we are fortunate that they can teach us about the rest of world. Environmental biology major Alessio Caselli, from Ferrara, Italy, allowed me to share his words so that we can learn from him.

American people of my age don’t care about my stories from Italy but instead prefer to make me say something funny because of my accent or make me do hand gestures. And that’s one of the reasons why I was so disappointed by American people: they see me as a mere stereotype of a culture that they believe is inferior to theirs. I have met a lot of people since I arrived here, … and the first thing that almost all of them did once I told them I was Italian was the hand gesture with all the fingers touching in the middle of the hand. That is for some reason what Americans think we do all day in Italy…[I]t’s true that we use it, but only when we ask various types of questions, usually when we are angry. So every time someone calls my name and makes that hand gesture, all I can think about is how those kids believe that we use only those gestures and how horribly wrong they are. Another thing that people usually do when they do that gesture is say “It’s a me, Mario,” a phrase said by a fictional character that represents an Italian plumber in the videogame Super Mario. This game was made by a Japanese company, and I really don’t know why they decided to make him Italian, but that decision marked the future of Italians forever. So now people ask me to say that phrase while making the hand gesture, but apparently, it’s not enough for those people; in fact, every time I’m eating or doing something someone just asks, “Do you have this in Italy?” like it is a third world country without food or water. And those questions make me really uncomfortable because I don’t like that people see me as a poor guy who is trying good things for the first time while in fact we have probably more things than America.