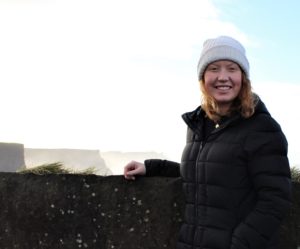 My very first impression of Ireland – the moment I stepped out of the airport, the first time my feet hit Irish soil – was that the air smelled different. That was my first impression. The air smells different. It wasn’t the display of fireworks and angel chorus singing from above that I had imagined, but that was my truthful first impression, and now I’m stuck with it. Still, my under-whelming mundane first impression gave way to much more exciting second, third, and fourth impressions. The picturesque expanse of lush, green acres of pastureland sectioned off by low-lying, weather-beaten stone walls greeted me on my bus ride from Shannon Airport to Galway, and although utter exhaustion defeated me about 20 minutes in, I knew I had a lot more beauty and excitement awaiting me in the months to come.

It’s been just over five weeks that I’ve been here studying at the National University of Ireland, Galway. Situated on the west coast of Ireland, Galway is rich in history and tradition. The heart of the city, only a 10-minute walk from campus, is vibrant and compact, and offers a variety of activities and photo-ops. An average day for me here in Galway consists of drinking too many cups of tea, exploring the shops in the heart of the city, and, lest I worry you by omitting it from my list, studying hard. The biggest adjustment I’ve had to face while being here hasn’t had much to do with the fact that I’m in a foreign country where they drive on the wrong side of the road. No, the biggest adjustment has been, in a surprising twist of events, the school itself, and not just the Irish-students-party-nearly-every-night-of-the-week aspect of student life. No, it’s the sheer size of NUI that still baffles me – roughly 20,000 NUI students is a far cry from the population of SMU. Despite this, the material I’m learning – Irish literature, Celtic mythology, and the indigenous arts to name a few – are making my time here worth it, and the history that Ireland has to offer, both in and outside of Galway, make every day an adventure.