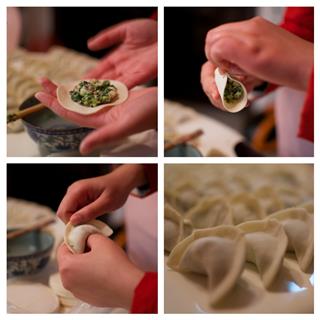 Dumplings have been a big part of Chinese culture for over 1,800 years, and they are especially important during the Chinese New Year celebration because a legend states that the more you eat, the more money you can make in the New Year.  They are shaped like boats and may contain many different fillings (minced pork, diced shrimp, ground chicken, beef, and vegetables), but to make them lucky do the following:

And now for the recipe:

Rickshaw Dumplings
Adapted from Kenny Lao
makes about 80 dumplings, depending on wrappers used

Cut the cabbage crosswise into thin strips. Toss in a large bowl with salt in a bowl and set aside for 5 minutes. Take handfuls and wring out the moisture. Dump out any remaining water in the bowl. Combine the cabbage with the turkey, scallion, cilantro, soy sauce, ginger, sesame oil, pepper and eggs. Mix well with a large spoon or, preferably, your clean hands.

Set yourself up in a spacious work area with the dumpling wrappers, a little bowl of water and a large cutting board or cookie sheet. Grab a helper or two. Lay out a dozen or so dumpling wrappers. Place about 1 tablespoon filling in the center of each wrapper. Dip your fingertip in the water and trace the outside edge of the wrapper with water. Fold the wrapper over to make a half circle and make a pleat at the top of the curve. Pinch in the sides then lift up the edges to meet the center, creating a pouch. Pinch the top together and bend out the sides slightly to curve.

Heat a skillet over high until very hot. Add 1 tablespoon oil (a little less if using a non-stick pan) and coat the sides. Place enough dumplings in a single layer to line the pan, then stand back and carefully pour in a 1/2 cup of water (enough to immerse the dumplings by 1/2-inch.) Cover and cook until the water is absorbed.

Holding the pan with a hot pad, place a large plate or platter as a cover on the pan and invert. Scrape the dumpling out with a spatula (careful of non-stick surfaces.)

Repeat with the remaining dumplings.

To make the dipping sauce, combine all ingredients in a small bowl.